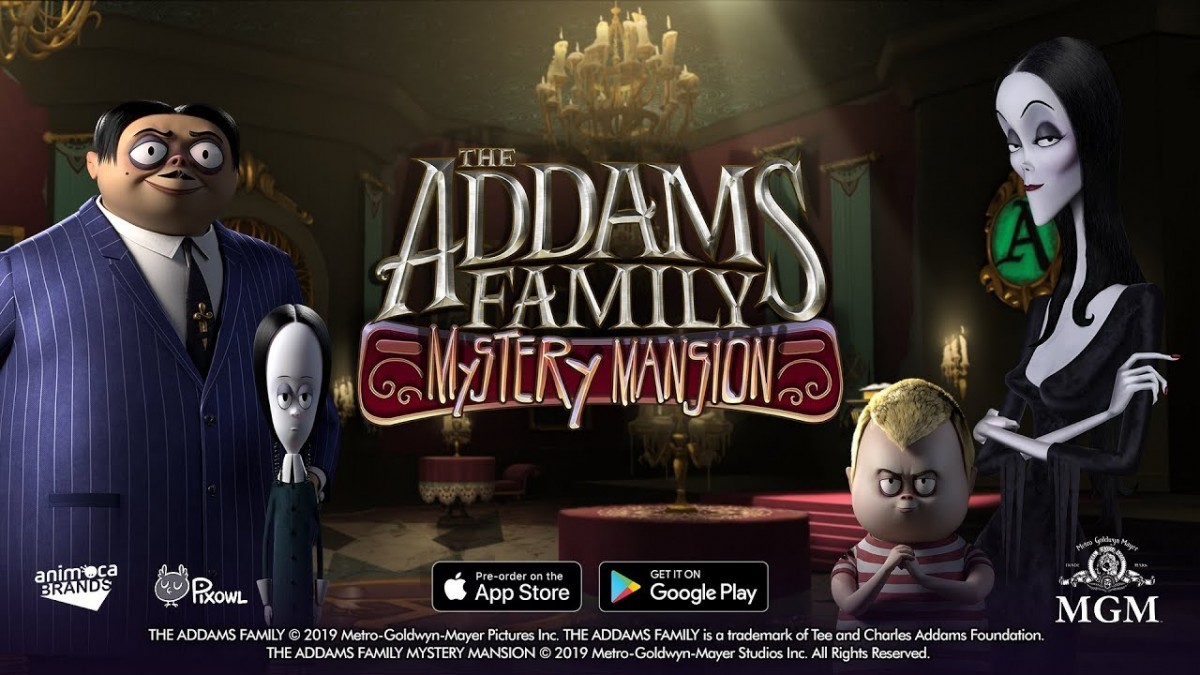 Animoca Brands announced that Pixowl will launch The Addams Family Mystery Mansion on October 9, 2019 for iOS and Android. Pre-registration is now open at www.addamsfamily.game ahead of the game’s launch.

The new mobile game is based on the highly anticipated animated movie, The Addams Family, from Metro-Goldwyn-Mayer Studios Inc. (MGM), which opens in theaters worldwide on October 11, 2019. The game will have an original story and simulation gameplay based on Pixowl’s experience producing hit player-centric world building experiences and character-driven narratives.

In The Addams Family Mystery Mansion, something mysterious is afoot! Upon returning to their Mansion, Morticia and Gomez need the player’s help to reunite the rest of the family and re-furnish their home. Through chapters and missions driven by the game’s original story and witty dialog, players will collect favorite characters from the movie and expand their catalogue of spooky furniture and decorations.

The game’s heritage is underscored by the expertise of Pixowl and Animoca Brands. Animoca Brands, one of the leading mobile game developers in Asia, is a PocketGamer Top 50 Global Developer and has one of the most extensive branded IP portfolios in the industry. Its subsidiary Pixowl has produced games for seven major IPs with over 350,000 daily active players. Along with its original franchise The Sandbox, Pixowl’s experience includes working with leading brands including Snoopy, Goosebumps, Garfield, The Loud House, Wonder Park, Ghostbusters, Shrek, and Pac-Man.

The Addams Family Mystery Mansion will be released on October 9, 2019 for iOS and Android. The game is free-to-play with optional in-app purchases.

About The Addams Family
Get ready to snap your fingers! The Addams Family is back on the big screen in the first animated comedy about the kookiest family on the block. Funny, outlandish, and completely iconic, The Addams Family redefines what it means to be a good neighbor. Conrad Vernon (Shrek 2, Monsters vs. Aliens, Madagascar 3: Europe’s Most Wanted) and Greg Tiernan (Thomas & Friends, Day of the Diesels) direct a voice cast led by Golden Globe winner Oscar Isaac (Star Wars: The Last Jedi, Annihilation) as Gomez Addams, Academy Award winner Charlize Theron (Atomic Blonde, Mad Max: Fury Road) as Morticia Addams, Chloë Grace Moretz (The Miseducation of Cameron Post, If I Stay) as Wednesday Addams, Finn Wolfhard (It, Netflix’s Stranger Things) as Pugsley Addams, Nick Kroll (Big Mouth, Sing) as Uncle Fester, Bette Midler (Hocus Pocus, Beaches) as Grandmama and Academy Award winner Allison Janney (I, Tonya) as the family’s arch nemesis Margaux Needler. The Addams Family will be distributed theatrically in the U.S. by MGM through its United Artists Releasing banner on October 11, 2019.