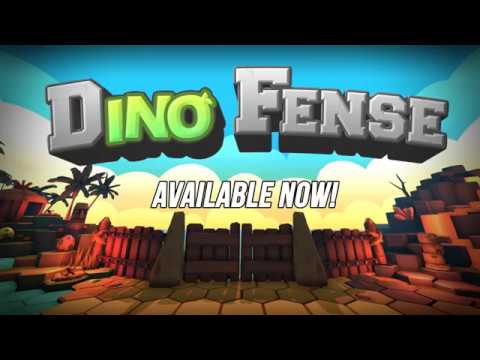 In partnership with game developer Team6, Blue Goji has expanded into Virtual Reality with “DinoFense” on SteamVR, compatible with HTC Vive and Oculus Rift headsets. Availability on the Oculus Store and GearVR Store will be available shortly.

Defend your Dino Village and Dinozens from being attacked by the uncivilized world. By understanding the landscapes and saving the imprisoned dinosaurs, you are awarded power ups and a higher score.

•           27 Levels Across 3 Unique Environments
Fight off angry cavemen and other creatures who have imprisoned your fellow dinosaurs with rescue missions on the Beach, in the Jungle, or near a Volcano.

•           Powerups
Defeat more enemies to unlock powerup items, such as Dynamite, to decimate your attackers, and keys to free your Dino friends.

•           360° VR Views
Strategy is key in order to make it to the end of each wave. Determine which opponents you should take out first, before they reach you. Enemies will spawn all around you: be alert of your surroundings if you do not want to be their next prisoner.

•           Adventure & Endless Modes
Battle your way through each tier of difficulty or face wave after wave of invaders until you fail. In Adventure mode, players can enjoy shorter levels with preset difficulties. As the levels progress, so does the difficulty, challenging you with more adversaries and more waves before you win. Endless mode has no such respite. Players will face an ceaseless barrage of enemies. Survival is key.