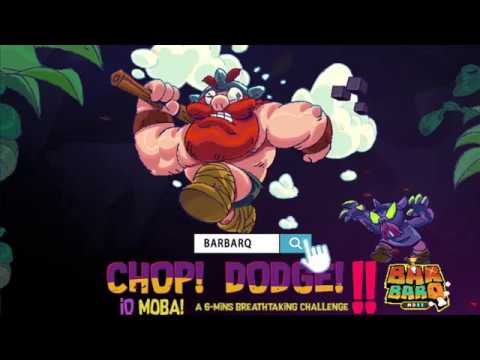 One of the biggest features of BarbarQ is to encounter and fight with global savages. Players could randomly team up with other Barbarians from all over the world and fight against each other. The first introduced and exclusive 3v3v3 group fighting mode allows you to ally with other two savages and battle against other two teams.

Followed by the classic IO gameplay of real-time multi-player battle, limited map and resources and revival after death, players need to leverage your strategy in this 6-minute battle. Unlike other MOBA game, which could be 15 minutes or even more, BarbarQ wants to bring both quickie and thrilling battle experience to players.

Throughout the gameplay of BarbarQ, players will never be left out, with the mind of all the allies, teamwork is nonignorable. The ultimate victory only comes when players achieve the top ranking. The mushrooms and random skills on the map will empower you!

Apart from random team-up function, players could always team up with their friends and family to fight together or purely enjoy traffic-free AI mode. Furthermore, players can also build up their own dream teams to beat other savages and dominate the arena.

The pixel art design adds more fun to the game. BarbarQ also cooperated with Rage Comic to allow players to communicate with emoji. Don’t hesitate to use this interesting and cute expression or even create some secret code with it for team internal communication.

This game is now available in both App Store and Google Play.