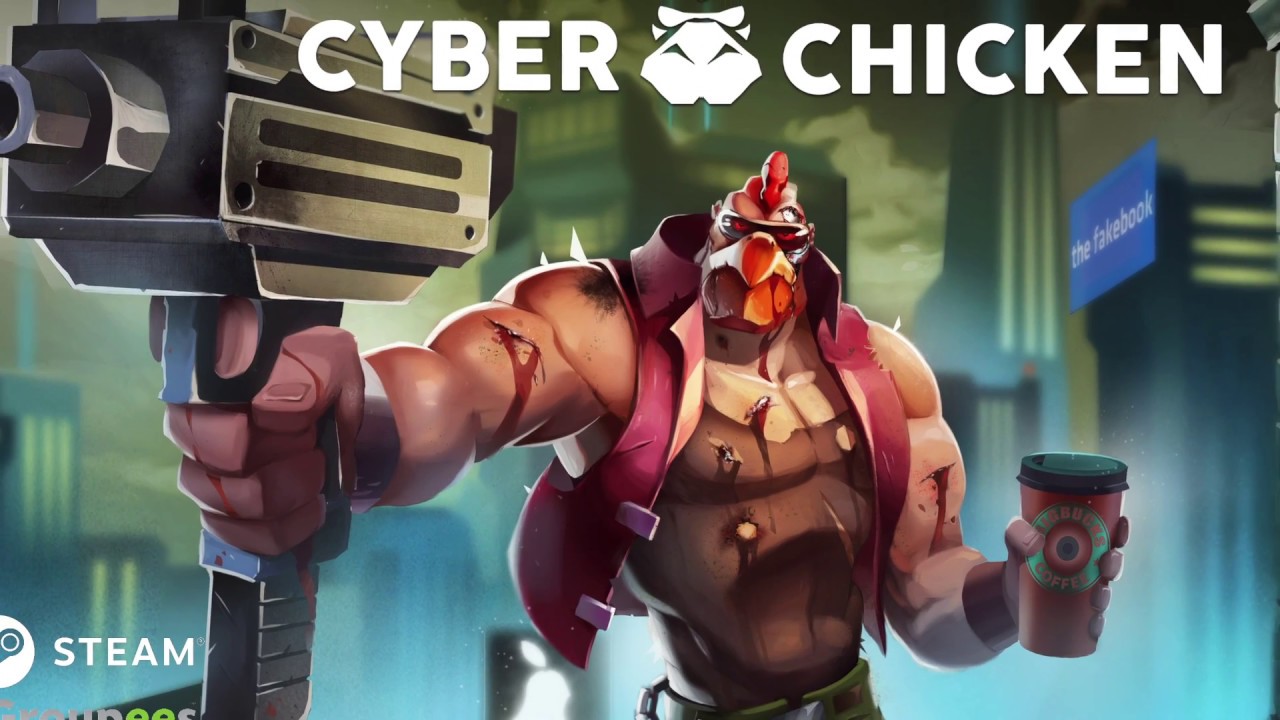 Cyber Chicken — a 2.5D side-scrolling action platformer set in a dystopian New York City of the future — is launching today on Steam! Play as a military-grade cyber-organism facing a cyberpunk revolt in this balls-to-the-wall homage to ‘80s action heroes.

The Fakebook, Big Bucks Coffee, and intergalactic leader GW have played you for a fool. They had you wasting your time chasing after scrawny cyberpunks instead of the real villains. It’s time to take these corporate giants down … one bullet at a time.

Equip a Magnum 357,000, Napalm Flamethrower, Sawed-Off Howitzer, Thermonuclear Dual Uzis, and more — must-haves if you want to make a dent in the universe. You can also upgrade your weapons and platforming abilities at Big Bucks vending machines — but avoid going into debt: If you owe money (and fail to pay on time), the nastiest corporate accountant known to man (“The Collector”) will track you, kill you — then steal all of your hard earned upgrades!

“Cyber Chicken is an ode to the mythology of Don Quixote — and we use satire of pop culture as our windmills for this futuristic terminator-errant to tilt against. Part of the fun for us was to layer in as many humorous references to classic books, movies, games and modern day institutions and figures as possible. There’s a big story going on here. Ultimately, the game is about what it means to be a hero — but more than anything, we wanted Cyber Chicken to be all about fun.”

“Cyber Chicken was built with old-school gaming in mind. Growing up as a gamers, we embraced that while also adding plenty of modernized elements. We offer players lots of weapons, upgrades, melee moves and enemy encounters — and while the action is pretty relentless, we’ve integrated humor and some playful mechanics such as our unique debt system or coffee-fueled bullet time to keep players on their toes. We want to give them an experience that feels familiar but is ultimately fresh, exciting — and most importantly, fun to play.”

KEY FEATURES
*   Terminate enemies with multi-weapon arsenal and skill set with more than 45 upgrades.
*   Double-jump, dash, ground-stomp and wall-jump your way through more than 13 levels in a semi-open world — upgrading to unlock new areas.
*   Use credit at Big Bucks vending machines — but avoid the wrath of “The Collector,” who might repossess upgrades to repay your debt!
*   Enjoy a fully voice acted cast and soundtrack featuring 40 original tracks composed by Noam Guterman.
*   Experience comic book-style, story-driven gameplay with lots of comedic moments to balance the mayhem.
*   Personalize your controls with custom key bindings with support for mouse and keyboard or gamepad.

PRICING & AVAILABILITY
Cyber Chicken is now on sale for $12.74 — a 15% launch discount lasting through the game’s first week on Steam. Cyber Chicken is compatible with Windows, Mac, and Linux.