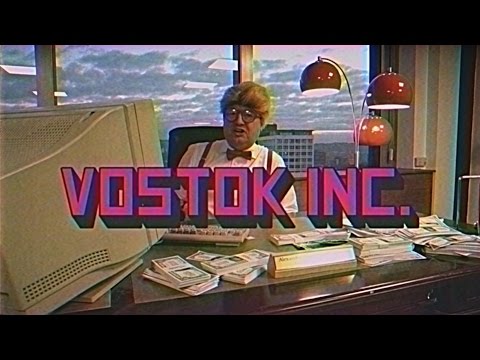 Nosebleed Interactive’s tongue-in-cheek sci-fi shooter Vostok Inc. is heading to Steam, PlayStation 4, PS Vita and Xbox One as a digital and physical release* for 2017! Published by BadLand Games, Vostok Inc. lets you play as a corrupt, narcissistic yuppie setting out to make as much money as humanly possible in this greed-driven twin-stick shooter without a conscience.

As the newly-appointed CEO of Vostok Inc., you have one goal: to become filthy, stinking rich. Piloting your very own ship, explore and exploit more than 40 planets across six different solar systems in your quest to earn ludicrous amounts of MOOLAH! Start by landing on any planet to begin colonization, build factories, and rake in the big bucks. Once the MOOLAH starts flowing, you’ll be able to upgrade your ship’s weapons and augmentations. Increase profits even further by finding and recruiting managers, consultants, and executives scattered throughout the galaxy.

Of course, it wouldn’t be much of a shooter if there weren’t enemies to blast on the way to untold riches. You’ll encounter a variety of different alien races (each with their own agenda) with assets ready for “liquidation.” Each dead enemy, defeated boss, and vanquished environmental hazard drops loot, making every encounter a ripe business opportunity.

Need to take a break from all the mayhem? Kick back and enjoy one of Vostok Inc.’s retro-inspired 13 mini-games. Even the most (money hungry) hard-working CEOs deserve a rest!

“Vostok Inc. started life as a game jam, but given how addicted the team all got to the prototype, we knew it was something we needed to turn into a full-blown game,” says Andreas Firnigl, managing director and designer at Nosebleed Interactive. “I often find myself torn between wanting to play stuff while watching TV and having a proper sit down session with a game. Vostok Inc.’s blend of idle clicker metagame and twin-stick arcade action means I can play how I want and enjoy it as much in short bursts, like during a commercial break, as I can in long gaming sessions.”

“Working alongside Nosebleed Interactive is an absolute pleasure,” says Luis Quintáns, CEO of BadLand Games. “Vostok Inc. is unlike anything else out there. We’re confident that the game will make quite an impression when it launches in 2017.”

Vostok Inc. players will be able to use the same save file across multiple devices, seamlessly looting alien ships and managing moolah while relaxing on the couch, or using a handheld console during a bus ride to work.

Explore more than 40 planets over 6 solar systems.
Land on any planet to begin extracting resources.
Craft and upgrade an arsenal of 40+ diverse weapons and ship augmentations.
Collect loot from fallen enemies, bosses or environmental hazards.
Find and recruit managers, consultants, and executives scattered throughout the galaxy, and keep them happy to boost planetside production.
Play 13 minigames to unlock massive ship and weapon upgrades.
Enjoy an adaptive audio system, with music that constantly evolves as you play!
Use the same save game across a variety of devices.

Vostok Inc. will launch in 2017 on Steam, PlayStation 4, PS Vita and Xbox One as digital and physical editions.

* Pricing and exact launch date to be confirmed in 2017.

*Physical release details to be announced at a later date.