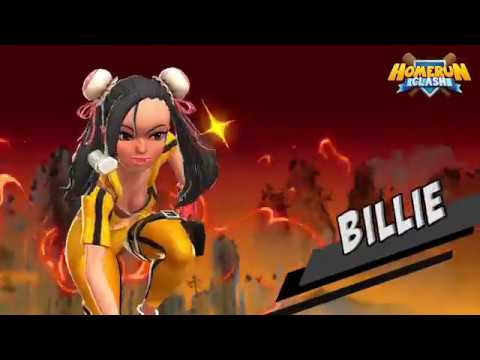 Mobile game developer HAEGIN announced that Homerun Clash, the real-time arcade home run derby game, released the v1.18.0 update allowing players to sign up and join a clan of their choice. For the first time, players can join up with their fellow sluggers, share gameplay tips on the clan bulletin, and check acquired trophy rankings against other clans.

This update will also introduce the new K.O. mode match format in the upcoming home run Tournament. Under the new match rules, players must completely knock out their opponent by scoring points that do more damage as the match progresses.

Along with the update, HAEGIN has also revamped the trophy rewards system which allows players to collect rewards based on their total trophy winnings. The update will also introduce new style outfits for fierce killer Lili Wang and boxing champion Mr. Blut.

“Our plan from the beginning was to keep developing more content beyond the simple home run derby game format, with the 4-player Battle Royale and Tournament modes being iterations on that idea,” chief developer Minkyu Park explained. “Clans are the latest logical step in that direction which provides users with more purpose and sense of community within the game. Players can expect much more clan-related content in future updates.”

Homerun Clash is an arcade-style home run derby game featuring real-time multiplayer PvP, single-player challenge mode, and bi-weekly tournaments. Gameplay is fast and exciting, with simple controls and high-quality graphics. In multiplayer, players can use special skills to temporarily blind opponents or fire up lightning fast balls that are impossible to hit. Players must choose a batter character, each with unique skills strategically selected with skill cards that add to their bonuses. With bonus scores given for hitting the ball over the fence after a called shot, or the jumbo screen out in the stands, the game can change hands in the blink of an eye. The game launched worldwide in January of 2019 and placed in the top 10 highest grossing sports games category on the App Store and Google Play in over 70 countries including South Korea, Taiwan, and the United States.

Download Homerun Clash for free on the App Store and Google Play.