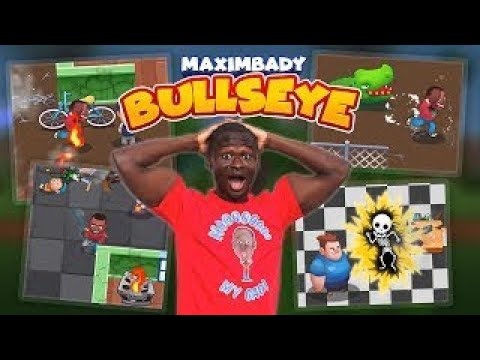 YouTuber action game MaximBady: Bullseye launched on iOS and Android.  In this co-production by Midnight Pigeon and Maxim Bady, players take the role of popular YouTuber Maxim Bady after he gains the powers of a rhino.

Who is Maxim Bady?
Maxim Bady is a popular Birmingham based YouTuber with more than 4 million followers across YouTube, Facebook and Instagram – not to mention a BBC 3 television show ‘The World According to MaximBady’! Renowned for his irreverent humor, reaction videos and hilarious expressions and accents, MaximBady: Bullseye is his debut video game appearance!

About MaximBady: Bullseye
YouTuber Maxim Bady has been given the powers of a rhinoceros in a freak accident! Like any good superhero, he’s going to use his newfound abilities to fight crime… with your help! Slide your finger and catapult Maxim Bady around more than 10 levels, packed full of thieves to catch and stuff to smash! Can you catch every thief in as few wild rhino charges as possible? Follow the story of his superhero transformation towards an incredible finale. Go for the perfect score, or just enjoy causing mayhem… the choice is yours.

You can download the mobile game now from the MaximBady: Bullseye store pages on the iOS App store and Google Play Store.