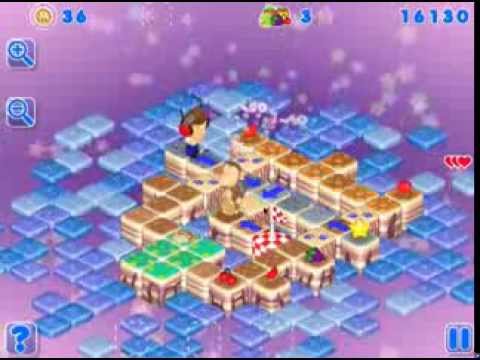 Monkey Mofo is a fast flowing colourful 3d action puzzle game that presents a challenge that will have gamers coming back for more. Throughout the multi levelled platform experience – collect all the fruit on a level and make it safely to the exit.

Each new world introduces a new challenge to the player in which adds a new layer of complexity, in addition to the challenges from the previous worlds Monkey Mofo pits the player as cute, cheeky monkeys in 200 levels, set in 18 worlds. Similar to the classic game, Lemmings, the monkeys in the game need their every move dictated to them and they need to be guided safely to the goal, collecting fruit, whilst avoiding the various enemies like Dilbert Pickles and Dr Butcher and cunning traps, from bombs to teleports!

Along the way the players can collect coins, extra arrows clocks, magic mushrooms, stop and speed controllers to help them in their task.

‘For those of us who remember the classics like Lemmings on Amiga and Atari ST and ChuChu Rocket on the Dreamcast, Monkey Mofo harks back to the simple yet fiendishly addictive puzzler,’ says Patricia Curtis, Number One. ‘We’re thrilled to finally have game completed and deliver a true, best-in-class puzzle experience to players!’

Will Monkey Mofo make a Monkey out of you?

•Monkeys
•200 action packed levels
•3D Graphics
•An Awesome Soundtrack
•8 different character types
•Boss Levels
Monkey Mofo gives experienced gamers a game of their own, one that feels like those games they played when they were growing up, but also challenges their gamers mind.