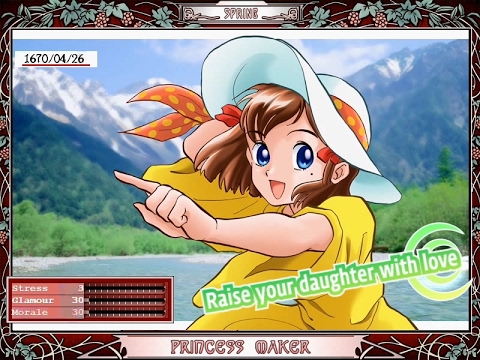 CFK, a game developer and publisher in Korea brings you a game that started the life simulator genre,「Princess Maker Refine」to Steam in the middle of February, 2017.

An original concept of 「Raising a Child」, 「Princess Maker」has started the boom of life simulation game. Being a never seen concept, a game system of raising a daughter from age of 10 with love and care to her womanhood was unique to many gamers at the time. It received a such high praise and fan base throughout the ages, and many fans out there are still replaying the original game up to this date.

On September 2016, a most popular entry of the series 「Princess Maker 2 Refine」 was released ahead of the predecessor due to its popularity. Even after more than two decades have passed, it presented the gamers with variety of enjoyment to new and old fans. Many old fans were praising of how they could reminiscence on the classic moments, and new gamers begun to seek for more games of similar genre. Even after all the years have passed, the Princess Maker series are getting a positive attention by gamers all around the world.

The 「Princess Maker Refine」is a predecessor of 「Princess Maker 2 Refine」, and it is what started of the Princess Maker series. Story begins with taking an orphan girl into your care after the war, and raising her to become a fine woman with your love and care. The game system of nurture, education, and adventure begun with first Princess Maker game, and it is the game that created a foundation of rest of the game in the series. Princess Maker Refine has been reconstructed with full color graphic to fit the modern game style, as well as full Japanese voice-over and updated sounds. In addition, game is equipped with achievement for the Steam platform.