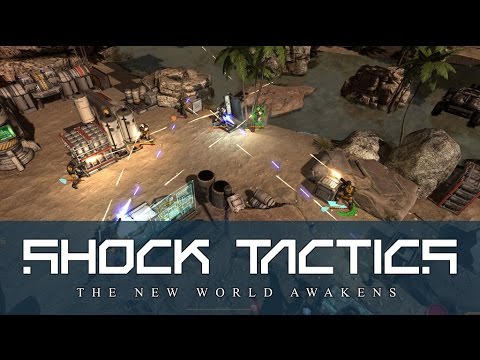 Fans of turn-based strategy games can mark early 2017 in red in their calendars. Shock Tactics, developed by Berlin-based Point Blank Games will be released for Windows PC in Spring 2017. Shock Tactics combines fast tactical combat, exploration, squad management and base-building with a mysterious story set on the planet Hephæst.

Players lead a team of mercenaries working as trailblazers for the first wave of Free Space Pioneers exploring a newly discovered alien planet. While searching the hostile world for alien technology you lead your team into tactical combat against pirates, alien creatures and the troops of the Imperial Consortium. Set up outposts and dig sites to exploit the secrets that this new world holds, in order stand against the incoming invasion. Everything is out there for the taking, but nothing will come free.

“Shock Tactics is our own vision for the modern age strategy game. The very aggressive turn-based gameplay forces players to get rid of familiar habits and defensive tactics and deal with new, more active ways of fighting enemies,” says Leonard Kausch, Game Director at Point Blank Games. “We can’t wait until the players finally can see the results of our development.”

Features:
Aggressive Tactics: Always drop right into the action and bring the fight to the enemy before they can reinforce their position. Play fast tactical assaults on time sensitive objectives and stay in full control.
Challenging squad tactics combat: Lead your strike team against smart enemies that employ a large array of tactics. Know your enemy, build a strategy, rule the battlefield.
Strike team progression: Harness the power of alien artifacts to upgrade your base, build new weapons and armor, and train your soldiers with different abilities to fit your playstyle.
Full Control: Action Points allow you to move your soldiers with full control, and the interrupt system enables long sprints that are stopped when new enemies are spotted, so you can assess the situation and spend your remaining Action Points accordingly.
Hostile Planet: The procedurally generated world map leads to different strategic situations in each game session. Fight in three different environments of Hephæst to claim the alien artifacts.
Fate of Hephæst: Experience a story revealing the secrets of the planet while the great factions steer towards a final battle deciding their fate in the galaxy.