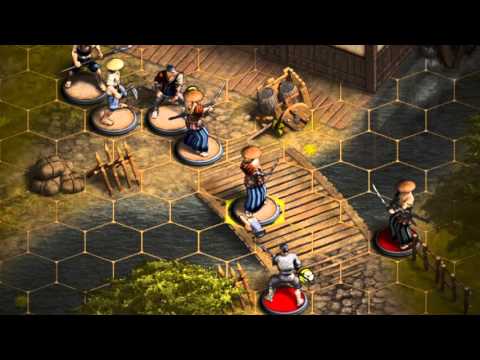 Warbands: Bushido, a classical boardgame with cards, more than a hundred of miniatures, dices and dozens of beautiful terrains to fight on, hits Kickstarter aiming to bring the true tabletop wargame experience to the PC and mobile devices. The game plans to make crossplatform multiplayer battles boardgamers are used to and beautiful single-player scenarios available on Steam, MacOS and iOS.

Game background is the story of civil war in 16th century Japan, known as “Warring States period”. Samurais and ronins, criminals of all sorts, ninja clans, Chinese pirates, Portuguese mercenaries and firearms traders, all trying to benefit from anarchy and conflict. It is hard to find a more atmospheric and dense setting for a digital board game.

Game has an isometric, tabletop-style look with miniature-like characters, cards, dices, prerendered battlefields and storymode locations. There are more than 100 various paintable units and heroes planned for release and later additions. Story-driven single-player was highly influenced by Final Fantasy Tactics and Valkyria Chronicles, with several different campaigns, with its own characters and events. On the other hand, multiplayer skirmishes will let players test their skills against each other in the best traditions of tabletop wargame classics like Warmachine or Mordheim with a fast-paced Hearthstone-like gameplay.

The Warbands is planned to be not just a series of tactical games, but mostly it is a set of core rules and gameplay, complemented with features depending on actual setting. Bushido is focused on close combat tactics, fighting style, individual weapons and skills of players´ units. While in case of naval warfare, it will most likely shift towards ships maneuvers, wind direction and power, quantity and type of cannons and crew skills. In WW2 the most important features will be armor of fighting vehicles from different sides, type and rank of infantry units, terrain relief, presence of cover and so on and so forth.