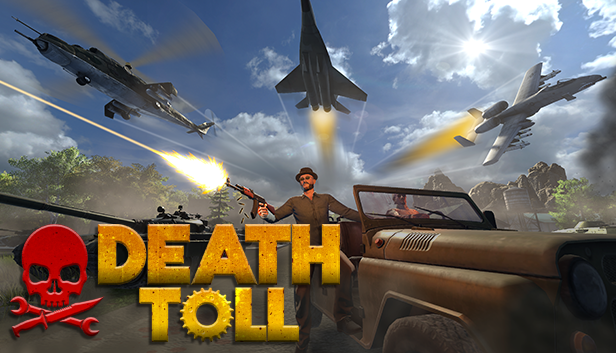 Death Toll is an open world first person multiplayer survival shooter with a unique game mode that focuses on team play, and vehicle combat. Players are placed in a large open world littered with disabled vehicles, and the supplies they need to survive. “Death Toll” pits players and teams in a race to find and secure 4 special items dispersed on the map and be the first to escape the island. Accomplishing the goal will not only require them to collect the items needed for basic survival and self-defense. But also, mechanical elements needed to repair weaponized vehicles, such as tanks, jets and helicopters which eventually will be their ticket off the island.

Weapons:
Death Toll includes a wealth of modern firepower like assault weapons, RPGs and grenades, along with defensive measure like camo clothing and body armor.

Survival:
You’ll need to find food if you want to survive. Canned food is available if you can find it, but the best way to keep yourself fed is to hunt. The island is home to deer, rabbits, fox, and boar, all of which can be taken for food.