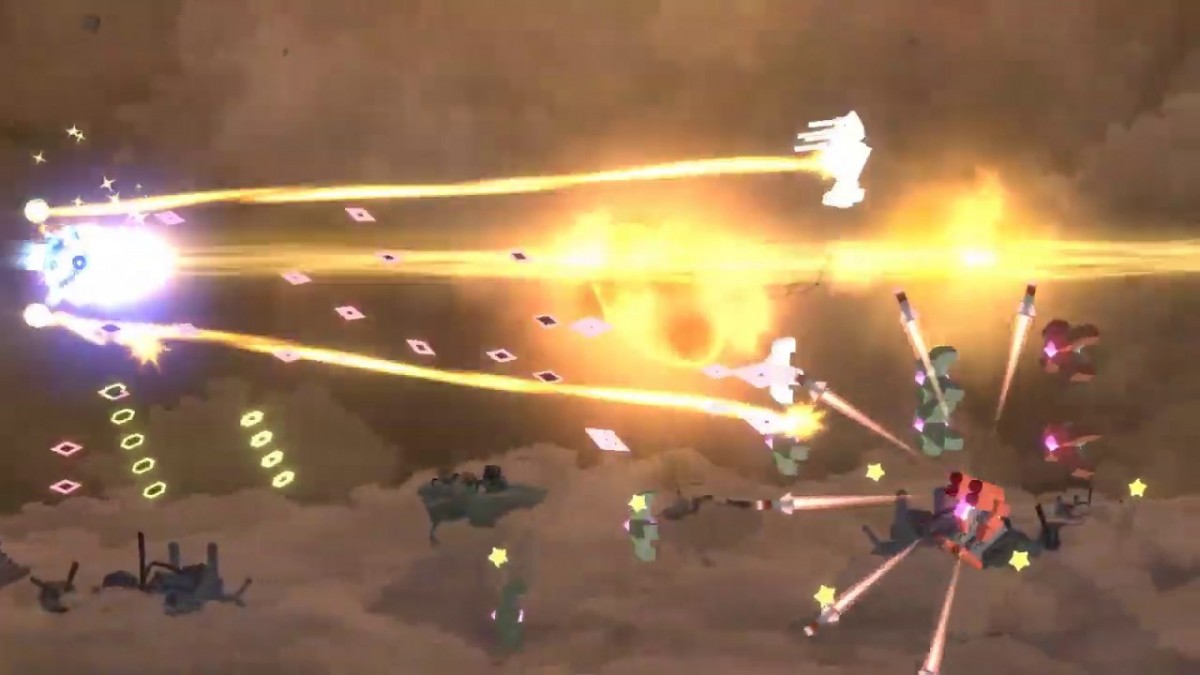 Grand Brix Shooter, a hyper arcade shoot’em up from developer and publisher Intragames, is out  for Nintendo Switch and Windows PC Steam.

Grand Brix Shooter, is a side-scroll bullet-hell fusion shooter that adds various elements for beginners to hard core players. Here is the introduction of the key system for the players of Grand Brix Shooter.

【The Key of Fusion Technology, The Brix Core】
The Brix Core, said to be controlled only by Prince Brix, is the nucleus of all the aircraft. This is the rhombus-shaped object that shines in the center of the device, and if it is hit, its durability is reduced. All the aircraft have a maximum health gauge of three spaces, and they will be destroyed when the gauge runs out. The only way to recover is by fusing with a new airframe.

【The Fusion with Fuselage, The Fusion System】
In most shooting games, the aircraft is either fixed or to be chosen to play at start. There is a basic type of brix core in Grand Brix Shooter, and the player will encounter with random aircraft airframe processing the game. The player can use the fusion system to get on a new aircraft. There are various types of fuselage that comes in random after shooting down a specific enemy.

The player can decide to replace the aircraft but once it gets changed, the aircraft level is reset so a careful judgement is required. Since each aircraft has different characteristics and comes in random, it is also important to determine the timing of replacement. In particular, when there is only one health gauge left with a high-performance three-level aircraft, you will have to choose either to replace it with a new one to get maximum health gauge or to just believe in your control and continue playing.

【Nucleus Enhancement with a crystal and its Awakening】
By shooting down the red enemy fighters, they will drop the crystals and by collecting certain amount of them, the level of the aircraft get upgraded by enhancing its performance. The maximum level of each aircraft is limited to three. The crystals fill the experience gauge and helps the player to be in ‘awakening state’ where the aircraft’s performance will be greatly enhanced over time. If the player grasp the time of the appearance of a strong enemy, using the ‘awakening skill’ is recommended in a timely manner to play it more easily.

【Aim for ranking the first place of leader board】
After when the game is over, the scores are recorded on the leaderboard. There are separate leaderboards for Arcade and Challenge Mode. The records on the leaderboard will give the feelings of the greatest accomplishment for players.

The core systems described above are pretty important to play the game, so it would be helpful for the players to be acknowledged in advance before getting into the game.

【It is NOT THE END until IT IS OVER】
‘Challenge Mode’ is a unique mode of Grand Brix Shooter that infinitely push the player until their aircraft is destroyed. Be aware of the score ratio system and achieve top rankings on the leaderboard.

【Share HP on the local co-op on the Challenge Mode】
Grand Brix Shooter supports co-op mode up to 2 players. Co-op play of shoot’em up can be good a benefit but also be poison. The 2 players on the local co-op on the Challenge Mode share their HP. This means that if one of the player is damaged, the shared HP will be reduced. On the other hand, the HP will be restored once the player fuses with a new airframe, and this could create an opportunity to escape the crisis momentarily.