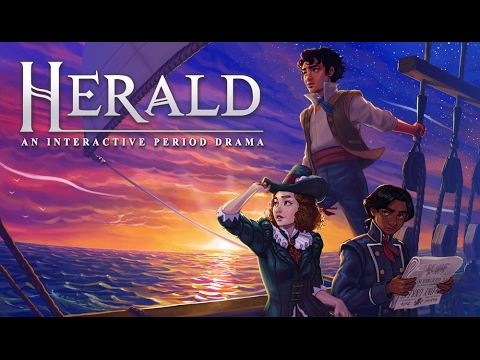 Dutch indie developer Wispfire has published a launch trailer for Herald Book I & II, a choice-driven adventure about a voyage into colonial tides. Herald will be releasing for PC on the 16th of February, 2017, on the Steam and Humble Store. Mac and Linux editions will be released at a later date.

An ‘interactive period drama’ about prejudice and imperialism with a unique 19th century-inspired setting, Herald is a point-and-click adventure like no other. Players follow Devan, a man of mixed heritage, working as a steward on board the merchant clipper Herald. Like other story-driven games, Herald features a branching narrative with multiple endings influenced by the player’s decisions. In a world divided by race, class and culture, players are faced with a perilous journey full of moral dilemma as they work to uncover the ship’s most sinister secret.

“Herald offers an intriguing take on our colonial history, and aims to serve as a reflection on the diverse modern societies that are its product. Considering the current political climate, we decided to tell a tale about the consequences of colonialism for ordinary people and make players think about the part that they choose to play, both in- and outside of the game.”

Herald Book I and II are fully voiced and contain more than 3000 lines of dialogue. Following both a successful Kickstarter and a grant from a Dutch equity fund, the Democracy and Media Foundation, the developers were able to record the script with a diverse cast of professional actors. To celebrate this, they’ve just posted a new trailer showing gameplay and featuring the actors introducing their characters.

The PC versions of Herald Book I and II will be setting sail on Steam and the Humble Store for $/€ 9,99 on the 16th of February, 2017. Mac and Linux versions will be released shortly afterwards. Books III and IV will be released at a later date as purchasable DLC.

•A branching narrative that changes depending on how you decide to play.
•A mix between 3D point&click and 2D visual novel gameplay with animated portraits.
•A multicultural cast of characters who might become your best friends or worst enemies.
•A unique setting: an alternate 1857 in which the West has been united as a single colonial superpower, the Protectorate.
•A gripping tale about finding your place in a world divided by race, class and culture.
•Full English voice acting by a cast of 13 talented voice actors. (3000+ lines!)