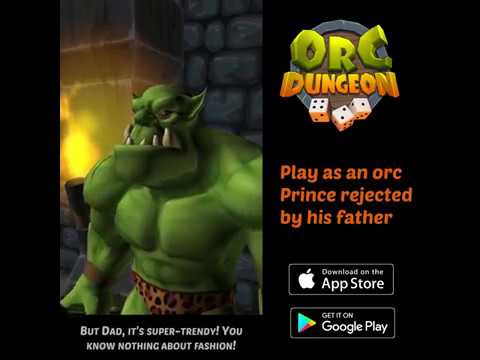 It’s impossible to have too many Orcs in your life. Thankfully ORC DUNGEON is here to help make sure you never run out. Created and published by indie studio Green Skin, ORC DUNGEON is shaking up turn-based mobile games with its unique dice-powered battle system, butt-trembling PvP tournaments, and friend-making co-op missions, all presented in delicious 3D Orc-o-vision.

Playing as the spunky young Orky Balboa, you will roam dungeons, earn weapons, get into fights, and occasionally argue with your dad about fashion. After being banished by your father (who is apparently quite sensitive about your fashion choices), your only chance to return home is by amassing a complete suit of armour in the dark corners you’re forced to explore.

The one-of-a-kind battle system links dice rolls to the weapons and attacks you use in battle. But keep your wits about you – your opponents rely on the same rolls for their merciless counterattacks. Create your own unique hero to lead into battle, collect and upgrade a deadly armoury of weapons, and hone your skills in the fight to regain your Orc street cred.

Forge a team of kindred heroes to compete in daily live tournaments, join a guild, and explore the dungeons side by side in co-op missions. Only the guilds with the most fearless adventurers will climb to the top of the leaderboard, so build the band of heroes you’ve always dreamed of. Conquering heroes get their pick of 4 weapons from a pool of 50, each with bone-crunching upgrades, plus you can travel with up to 30 minion creatures to boost your chances in battle. It’s time to get your Orc on. Hard.

ORC DUNGEON is available now on the App Store and Google Play.