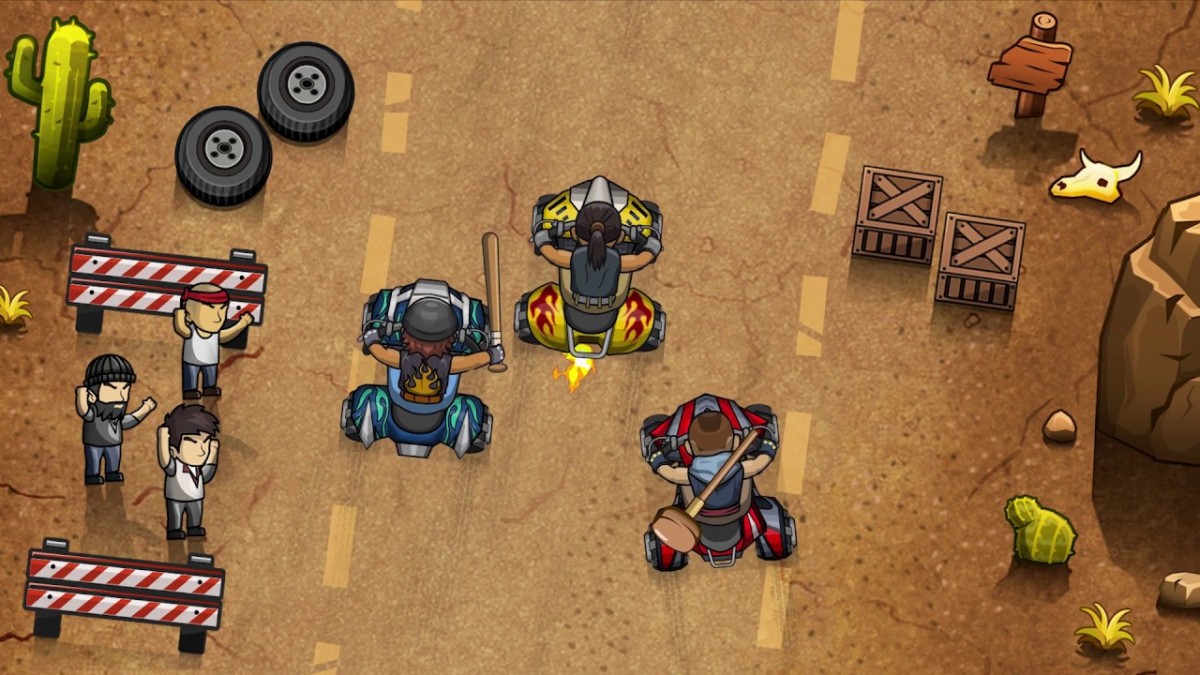 Rude Racers is a fast and furious bike racing game inspired by Road Rash with super fun gameplay that is easy to grasp and always challenging! The game is available on the App Store and Google Play.

The innovative gameplay, simple and balanced driving system and satisfyingly fun combat mechanics of the game deliver the thrill and adrenaline rush of old school combat-racing.

There is plenty of crazy action to experience over 5 detailed Seasons with an immense variety of competitions and challenges, loads of beautifully designed bikes, extreme weapons and crazy riders!

Seasons
The single-player campaign of Rude Racers is long and demanding with lots of fast racing, intense rivalries and non-stop combat! Spread out over 5 Seasons, there are more than 50 exciting events that offer a variety of challenges ranging from quick point-to-point sprints and elimination races to the bone-crunching action of the death matches and nail-biting finishes of the Outrun events!

Winning events awards the player Trophies and Cash that are used to unlock new bikes, riders and weapons or to buy special Kits for their bikes to gain an edge over the rival racers.

With each new Season, the action gets faster and harder!

Special Events
Rude Racers is more than just reaching the finish line and beating your opponents to a pulp! Each season introduces innovative and unique challenges that will put your skills to the ultimate test.

Take out the pizza-delivery bikes in Pizza Panic, recover your bike from the Police Truck in the Recovery events, dodge the oncoming oil barrels in the Exploder series or teach the nasty bullies with their supercharged bikes a lesson in the Hunter events—the variety of content on offer is simply astounding!

Boss Matches and Special Kits
With tougher opponents and more demanding races, each Season is harder than the one before and to keep up with the racers, you need to upgrade to faster bikes that have better armor and handling. If you don’t want to splurge on new bikes, then the Final event of any Season is the best way to overthrow the top competitor and get control of their unique bike. These concept bikes cannot be purchased with Cash and will ensure that you stand out in the crowd!

Before each event, you also get presented with an option to pick up some crazy power-ups for your bike—get that extra bit of speed on overtaking manoeuvers with Boost Packs, increase your armor with Shields or spill some oil in the path of trailing opponents to send them sliding into a wall!

Crazy opponents!
The tremendous variety in types of opponent racers is perhaps the biggest strength of Rude Racers. Months of meticulous experimentation and testing has enabled us to design some of the most advanced AI ever seen in the genre. Rival racers are always aware of their surroundings and objectives and will behave differently based on the situation which enhances the replay-value of the events.

From skilled no-nonsense racers to heavy-handed lunatics who’d try to hurt you no matter the cost, every racer has a very real personality.

Face-off against the high-flying motocross bikers, weave through the distraction of civilian traffic and give those pesky, cattle-prod wielding cops the slip!

Quickplay!
Whether you’re looking for some quick and fiery action but don’t have the time for picking the best combination for the next event or are just low on Cash but itching to test-drive the new bike you just unlocked—the Quickplay mode will always keep things fresh, exciting and extra-challenging! Play a randomly generated event with a set bike, weapon and power-ups and experience Rude Racers at its unadulterated best!