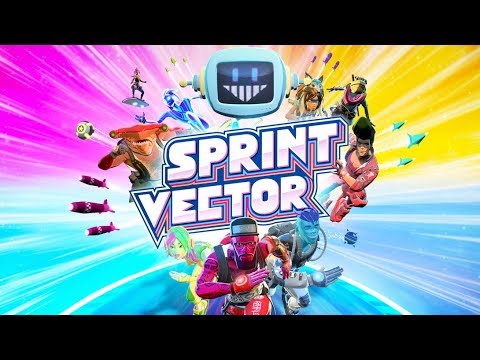 In Sprint Vector, players join the ranks of the most competitive, intense game show in the galaxy, hosted by media mastermind and athlete “recruiter” Mr. Entertainment. Step into the vectorblades of the show’s eight unique star sprinters and hit the pavement (or pipes, or ice) on colorful courses full of twisted traps, tricky shortcuts, high-speed platforming elements, and game-changing power-ups. The game will launch on PlayStation VR on February 13, 2018.

“When we set out to make Sprint Vector, we wanted to tackle the ongoing challenge of locomotion in VR from a fresh ‘Why not?’ perspective,” said Alex Silkin, Survios co-founder and Chief Technology Officer. “We challenged ourselves to not only come up with new methods of movement in VR, but to push the envelope in terms of artificial, high-speed, and tactile locomotion while avoiding physical discomfort in the player. Today, we’re shipping the pinnacle of this effort.”

At the core of Sprint Vector is Survios’ proprietary Fluid Locomotion™ system, which allows players to achieve unprecedented levels of speed and mobility not yet possible in VR and with minimal to no physical discomfort. By pumping his or her arms and mimicking a runner’s movement, the player is propelled forward; steering is accomplished by interpreting the user’s intended motion, responding to arm and head movement to take the player where they want to go within the race course. Intuitive controls grant players greater mobility and freedom to fling themselves up skyscraping towers, soar over obstacles, plunge into unknown depths, drift around hairpin turns, and strategically deploy traps and power-ups.

Intensely competitive and a perfect fit for VR eSports, Sprint Vector first hit the eSports scene at CES 2018 as part of the Alienware VR Cup. Along with weekly community challenges, Survios will be offering numerous national and global competitive challenges and events throughout the year, and racers can look forward to joining in both at home and at VR arcades around the world, including Survios’ own flagship arcade at the Del Amo Fashion Center in Torrance, CA.